The beginning of the second world war in Warsaw. It was 1939 when the Luftwaffe opened the German attack against Poland with operation Wasserkante. An air attack on Warsaw started on the 1st of September.

The Darkest Page of the Human History

It was the first day of September in 1939 when everything started.

The German's attacked Warsaw from the air throwing aerial bombs all over the city.

The siege of Warsaw just started by Luftwaffe.

The Luftwaffe was the aerial warfare branch of the combined German Wehrmacht military forces during World War II.

During the beginning of World War II but also after the failed Warsaw Uprising, approximately 84% of the city was turned into debris.

Not only this but also the majority of Warsaw's citizens were deported and killed by the German's.

Finally, the city was an easy target for the Soviet army, which occupied the whole of Poland, the 1st of January of 1945. 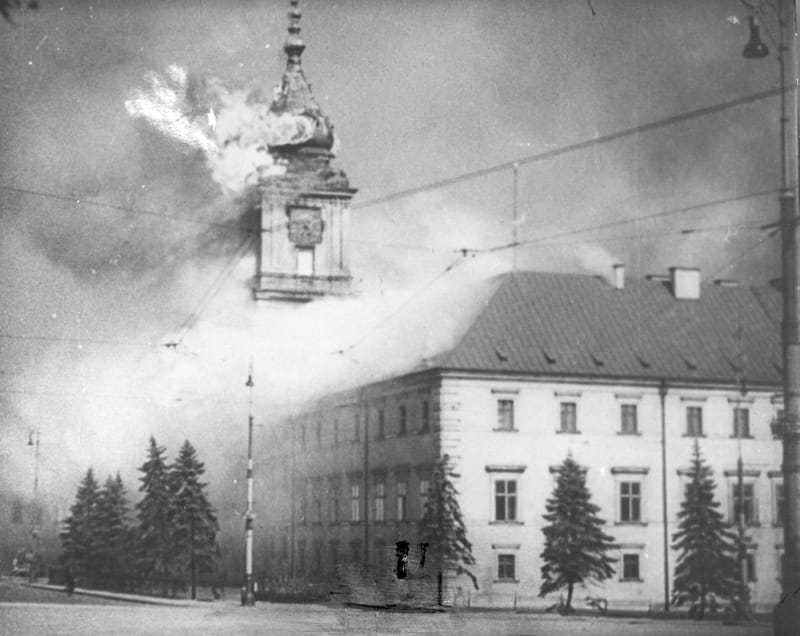 The German attack on Poland with operation Wasserkante on September 1st. This attack was not so effective due to the low-lying cloud cover and stout Polish resistance.

During this attack, the resistance successfully shot down 16 German aircraft with the loss of 10 of their own. But Warsaw's losses on aircraft forces were fatal because it was already very limited.

By the 6th of September, the air defense consisted only of 40 mm and 75 mm anti-aircraft guns.

Then on the 8th of September, the German army was approaching and attacked the portions of the city on the east bank of the Vistula River and also bombed major Polish Army positions in the west.

The final and fatal hit in Warsaw started at 08:00 on 25 September. Luftwaffe bombers under the command of von Richthofen conducted the largest air raid ever seen by that time.

Around 560 tons of high explosive bombs and 72 tons of incendiary bombs were dropped in the city. The city center was badly damaged with minor German losses.

Although the Polish forces were hit badly, they were not surrendered.

There was only one positive in the whole destruction. Due to the smoke and dust, the attackers lost their accuracy.

The result was to drop a significant amount of bomb loads on German positions.

However, on the 26th of September three key forts in the city defenses were captured, and the Polish finally surrender - on the 27th of September.

That was the beginning of the terror that followed the German occupation of Polish land. Poland became the major symbol in the holocaust against humanity.

The German's built Nazi Camps and Ghetto's all over Poland and they served in cruel crimes against humanity.

The closest to Warsaw is Treblinka, which is strongly related to the main reason that led to the Warsaw Ghetto Uprising.

The statue of Nicolaus Copernicus Story

There is an interesting story about the Nicolaus Copernicus bronze statue during the second world war and the Nazi occupation. 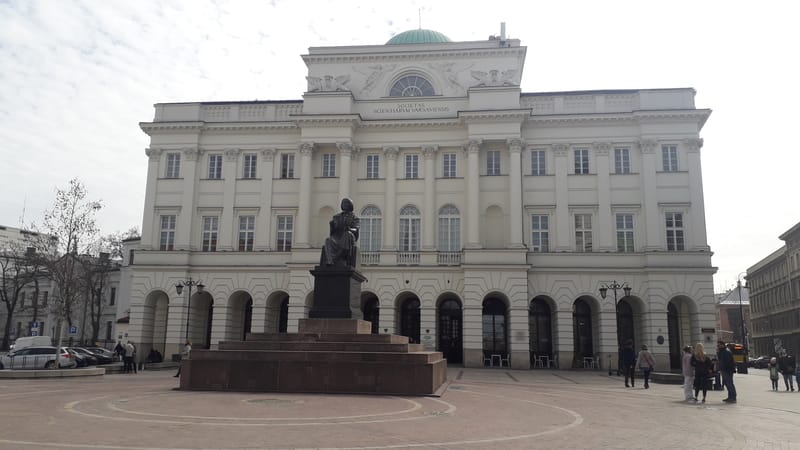 On the 11th of February, 1942 Maciej Aleksy Dawidowski removed the German plaque. In response, after 10 days, the Germans moved Warsaw's statue of Jan Kiliński to the National Museum in Warsaw.

Dawidowski and his comrades retaliated by placing a large graffito on the Museum ("People of Warsaw — I am here. Jan Kiliński").

Finally, on 13 March added also a new plaque to the Copernicus statue saying: "For removal of the Kiliński statue, I am extending the winter by two months. Kopernik".

During the Warsaw Uprising, the statue was damaged and the German decided to melt it.

Finally, they were not able to melt it and the statue returned to Warsaw on 22 July 1945 and renovated it.

The Warsaw ghetto uprising was the revolt of the Jews who were forced to living in Warsaw Ghetto.

The residents of the Jewish ghetto in the Nazi-occupied Warsaw, fight against the heavy-armed Nazi German, after massive deporting to extermination camps, mostly Treblinka.

The Warsaw uprising inspired also other revolts in extermination camps and ghettos around German-occupied Eastern Europe. 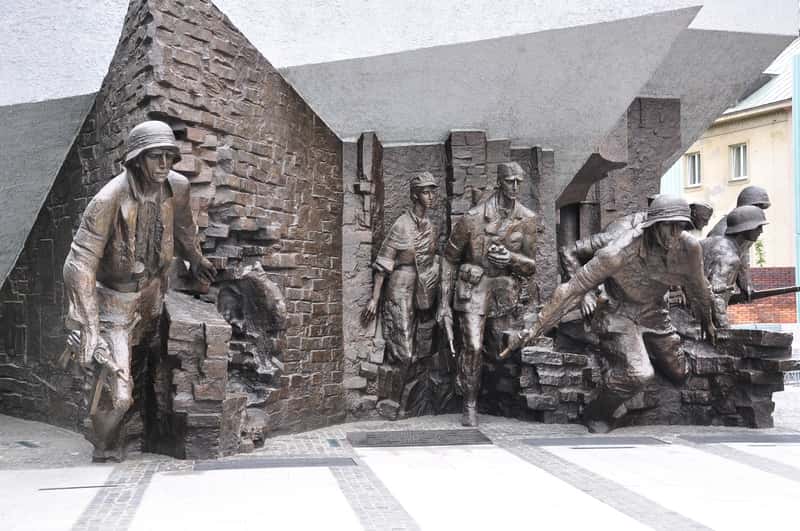 Shortly after the German invasion of Poland in September 1939, more than 400,000 Jews in Warsaw, the capital city, were confined to an area of the city that was little more than 1 square mile.

In November 1940, this Jewish ghetto was sealed off by brick walls, barbed wire, and armed guards, and anyone caught leaving was shot on sight.

The Nazis controlled the amount of food that was brought into the ghetto, and disease and starvation killed thousands each month.

Similar Jewish ghettos were established in cities throughout Nazi-occupied Eastern Europe during World War II. The Warsaw ghetto was the largest in Poland.

Mass deportation started for the Jews of the Warsaw Ghetto to Treblinka. In order to stop this, in the summer of 1942 with Mordechai Anielewitz as a leader, Jews resisted against the Nazi Germans.

After a month of valiant fighting, the Uprising was quashed and the ghetto burned to the ground.

When the deportations began the Nazis promised that people who voluntarily reported for “transfer” would receive three kilograms of bread and one kilogram of jam.

After a few days, the volunteers stopped coming, and the Nazis switched to siege tactics: city blocks would be closed off and the Jewish Police would remove the buildings’ residents to the streets.

History of the Polish Jews

YOUR GROUP ONLY PRIVATE TOUR is dedicated to clients who want individual care during the trip.

You do not share the vehicle with other customers, and your personal driver/coordinator will take care of your comfort and are at your disposal.

The POLIN Museum of the History of Polish Jews is a museum documenting the centuries-old history of Jews in Poland.

In the virtual library, you can see masterpieces of Hebrew and Yiddish literature in a multimedia form: Talmud, religious, philosophical and moral works.

Multimedia exhibitions await visitors, showing how Poles and Jews lived together for many hundreds of years and how both cultures merged together.

In the conventional space you can get acquainted with the family and neighborly relations, look at the Jewish-Christian relationship. It is a huge part of the human history of this city.

Once in a lifetime experience in Warsaw where you have the chance to see the best sites of the city while having fun. 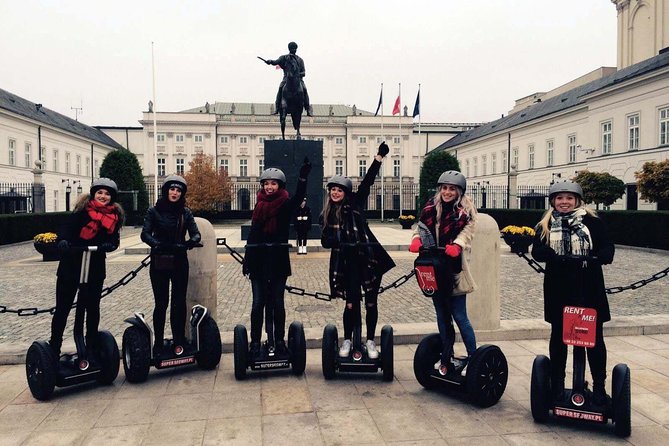 You are going to start this 3 hours tour at Brzozowa 14/4 street with a 10-15 Min training on Segway PT machines.

Then you will head to the Castle square through the Old Town.

From there, you follow the king's route to the tomb of the unknown soldier.

Then there is the 1st park on the way The Saxon Garden with a beautiful fountain, and plenty of space to ride around.

The next stop is the National Theater, Bank square, and to the museum of Polish Jews (POLIN).

You are going to see the Krasiński family park and palace, the superior courthouse, and the monument of Warsaw uprising.

From that point, you will reach the New Town, after the barbican, where Mary Curie was born and worked.

Finally, you are going to see a popular fountain park and the back of the Royal castle which is amazing.

Review *****: «Very professional, educational, fun. An extensive tour hits the highlights, and a great way to see the city. Lots of fun and a wonderful guide.»