Auschwitz I and II (Birkenau) together with the majestic city of Krakow is a must-see in Poland. You can now easily visit all in one day from Warsaw. Find out all you need in this article. Take an all-inclusive tour from Warsaw or just do it by train.

Krakow and Auschwitz from Warsaw

Auschwitz is the primary symbol of the Holocaust and is a must-see in Poland! It is much easier to visit Auschwitz from Krakow, but also from Warsaw it is convenient.

Krakow is the former capital of Poland and a fairy tale city with amazing architecture and a very active night-life.

How to Visit Auschwitz From Warsaw

Auschwitz I and II (Birkenau) together with the majestic city of Krakow is a must-see in Poland. You can now easily visit all in one day from Warsaw. Find out all you need in this article. Take an all-inclusive tour from Warsaw or just do it by train.

Krakow and Auschwitz from Warsaw

Auschwitz is the primary symbol of the Holocaust and is a must-see in Poland! It is much easier to visit Auschwitz from Krakow, but also from Warsaw it is convenient.

Krakow is the former capital of Poland and a fairy tale city with amazing architecture and a very active night-life.

How to Visit Auschwitz From Warsaw

The easiest way to visit Krakow and Auschwitz in one day without much planning and time spent is to book an all-inclusive tour from Warsaw.

When booking a tour from Warsaw to Auschwitz and Krakow, a mini-van or a car will pick you up early in the morning (between 5:30 to 7:30) from your hotel or apartment in Warsaw and you are going straight to Auschwitz. 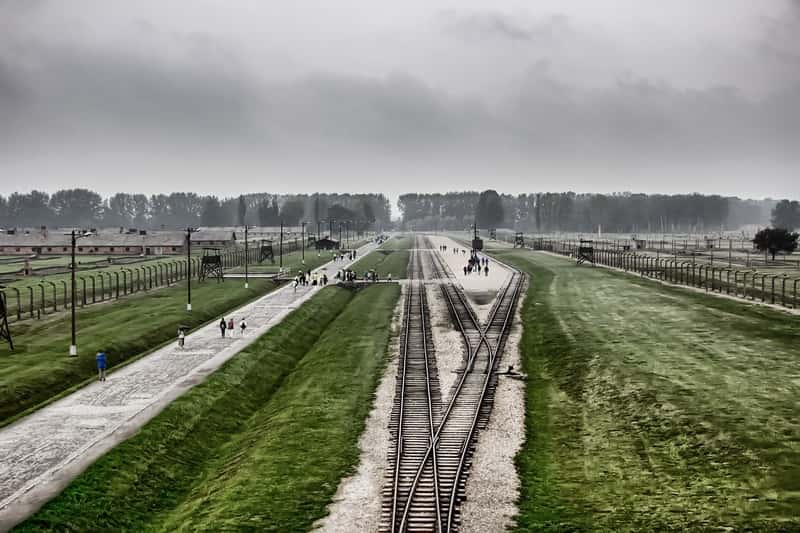 How to Get from Krakow to Auschwitz

Plan Your Trip to Krakow and Auschwitz

More extensive information and options can be found in the article about Auschwitz Visit. Briefly, all the information for one option which is the least expensive in order to visit Auschwitz from Warsaw is listed below.

It is highly recommended that you first book your tickets to Auschwitz as soon as possible. You can book them from the Auschwitz website.

Next to consider is that the fastest way to get to Krakow from Warsaw is by fast train which takes only 2 hours and 20 minutes. You can book your train from the intercity website (Warszawa Centralna to Krakow Główny).

If you book your train tickets early, you might even find tickets for only 50 PLN (around €12) per person one way. In case the fast train is expensive, check also the TLK train which requires less than 3 hours, but it is still faster than a car.

The earliest you get a train to Krakow from Warsaw the better it is. As soon as you arrive at Krakow Główny, you can take the LAJKONIK bus. The bus costs 15 PLN per person per ride and it will drop you just outside the Auschwitz I (museum) entrance.

Check out all the options for getting from Krakow to Auschwitz and find what is the best for you. It might be even more convenient to continue with a private transfer. In this way, you might even have the time to see both Auschwitz and Wieliczka, but no time to see Krakow. 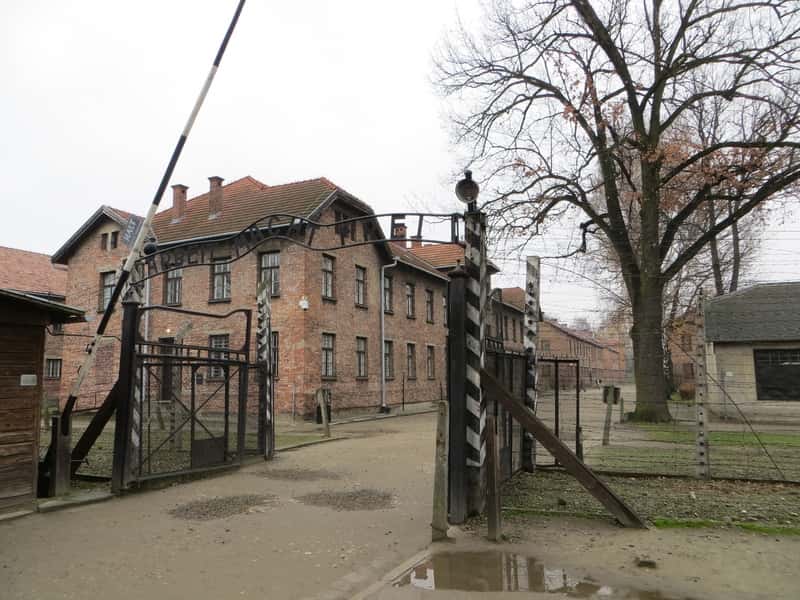 It is advised that you organize your schedule in order to be at Auschwitz at least 20 minutes before your entrance time.

Finally, you can also see Krakow city with a private guide or alone during your visit which is highly recommended.

A private guide for Krakow will be €100 for 2 hours and €110 for 3 hours. Check out the most important to see in Krakow.

Find Out All You Need About Your: Auschwitz Visit

Arbeit Macht Frei - "Work shall set you free". The expression comes from the title of a novel written by the German philologist Lorenz Diefenbach. The Novel story is about gamblers and fraudsters who find the path to virtue through labor.

Nazi, used the same expression in a few more concentration camps, like Dachau (1933).

Everyone heart about Auschwitz. It is the primary symbol of the Holocaust. The Nazi Germans killed more than 1,300,000 people, mostly Jews. There are undeniable proofs of the Nazi cruel crimes and unimaginable genocide they commit.

It was established by Germans in 1940, in the suburbs of Oswiecim, a Polish city that was annexed to the Third Reich by the Nazis. Its name was changed to Auschwitz. The direct reason for the establishment was the fact that mass arrests of Poles were increasing beyond the capacity of existing prisons.

The first transport of Poles reached KL Auschwitz from Tarnów prison on June 14, 1940. Initially, Auschwitz was to be one more concentration camp of the type that the Nazis had been setting up since the early 1930s.

It functioned in this role throughout its existence, even when, beginning in 1942, it also became the largest of the extermination centers where the final solution to the Jewish question - the Nazi plan to murder European Jews was carried out.

Birkenau was the largest of the more than 40 camps and sub-camps that made up Auschwitz. Construction began in October 1941 and it was supposed to be a camp for 125,000 prisoners of war. The majority of the victims of Auschwitz Concentration Camp died in Birkenau.

Hair of people, shoes, personal belongings, papers, and suitcases with names. The original fences, wooden watchtowers, and railway ramps have been preserved.

Also in the collections of the museum (Auschwitz I), you will see original documents and also the first gas chamber. A visit to the biggest factory of death in whole occupied Europe, Auschwitz II Birkenau is also included. 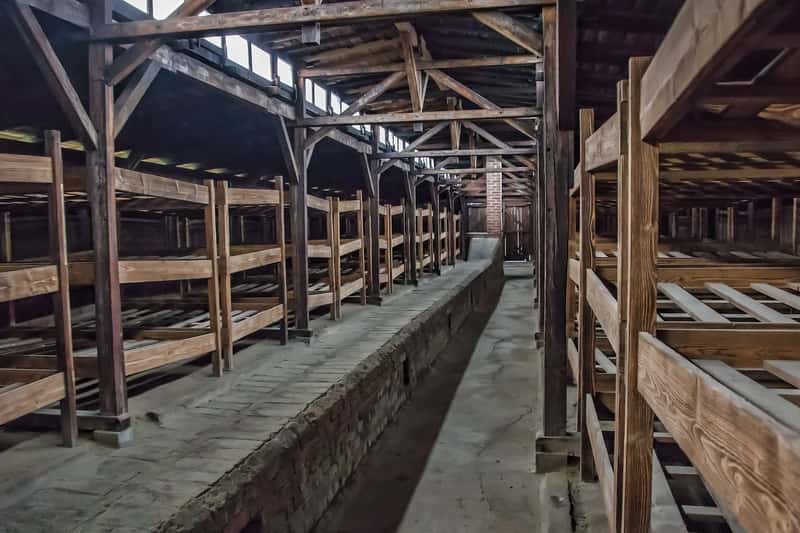 People deported from their place of living after the German-occupied their country and some of them were first locked into Ghettos for some time while other was deported straight away.

Nazi didn't care if there was children, pregnant woman, or older people. The selection was simple. Do we need people for work and do we have people to do what we need them to do? If someone could do the job, then he could live so far, otherwise, they were sent straight to the gas chambers.

Useful people had bigger chances to survive for a longer time. Some people survived only for a few days or a few hours. Many died on the train because the trip was very hard and there was no food or water in most of the cases.

A few people even had the idea to play the disabled in order to avoid hard labor and they were sent to the gas chambers as well.

Families separated, children stayed alone and were used in doctor's experiments. A special unit, the Sonderkomando, was responsible to empty the gas chambers from the dead bodies and then burn them to ash.

Sonderkomando was the creepiest invention of the Nazi Germans. As soon as they were opening the doors of the gas chambers, the dead bodies were falling in front of them. On the top, there were usually small children. It seems their parents were throwing them up, hoping that they will breathe.

The total extermination and humiliation of the Jewish nation, that was what the Nazi was trying to do with the «Final Solution» because they believed that the Jews was the one to blame for their loss in WWI and the economic crisis that hit Germany after that.

Read also about the city of Auschwitz.

All you Need to Know about Krakow

Get your transfer from Krakow to Auschwitz